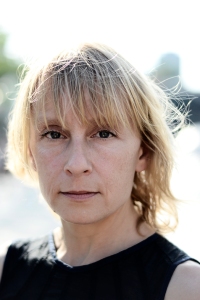 Sasha Ivanochko is a Montréal based choreographer, educator and artistic director of Ivanochko et Cie.

Miss Ivanochko first developed her powerful physicality competing for ten years on the Canadian National Gymnastics Team. At the age of 14 she began training in Ballet and Modern dance at the Etobicoke School for the Performing Arts, and in 1991 she graduated from the School of Toronto Dance Theatre. She has an MFA Interdisciplinary Studies from Simon Fraser University.

Miss Ivanochko made her choreographic debut in 1997, and since then has created a body of work renowned for its dramatic physicality, unflinchingly candid performances and detailed craftsmanship. Alongside her choreographies for Ivanochko et Cie, she has made several large group works for Toronto Dance Theatre, Winnipeg’s Contemporary Dancers, TILT sound+motion, Toronto’s Crazyfish Collective and independent artists Helen Husak (Calgary, Alberta), Naoko Murakoshi (Kobe, Japan) and Fabien Piché and Eve Rousseau-Cyr (Québec).

An educator since 1996, Miss Ivanochko has developed a training methodology that is specific to the demands of her choreography. The class supports participants developing a kinetic and interpretive understanding of her movement vocabulary, but as well encourages a broader range of skills that has applications towards many performance avenues. Ivanochko has guest taught across Canada, at Ballet Mannheim (Mannheim, Germany), Kobe Jogakuen University (Kobe, Japan), Simon Fraser University (Vancouver), was the Artist in Residence at The University of Calgary in 2014 and at The School of Alberta Ballet in 2017. Ivanochko is on faculty at École de danse contemporaine de Montréal and is a regularly a guest teacher at The School of Toronto Dance Theatre. She has created multiple pieces for pre-professional dancers, one of which, “Earth Dance, Wire Dance” is in the repertoire of STDT and been acquired by The Canadian Contemporary Dance Theatre. A rigorous and dedicated teacher, her highly physical and challenging classes have guided and inspired many students and emerging professionals towards high levels of artistic achievement.

Miss Ivanochko’s creative output extends into the worlds of other artists. She works as an outside eye for peers and provides creative facilitation and mentorship for young dance artists. A passionate advocate for the health and status of artists and the position of the milieu in greater culture, Miss Ivanochko served as Chair of the Canadian Alliance of Dance Artists, Ontario Chapter, from 2006-2009 and Chair of the Independent Standing Council with the Canadian Dance Assembly from 2009-2011.

Throughout her career, Miss Ivanochko’s artistic contribution to the Canadian dance milieu has been acknowledged through a variety of awards and bursaries. Miss Ivanochko is a five time Dora Mavor Moore nominee for Outstanding Performance and Best Choreography, the recipient of the 2007 K.M. Hunter Award, a two-time recipient of the Chalmers Family Fellowship, and the first recipient of The Kathryn Ash Award dispersed by the School of Toronto Dance Theatre. In 2006, Miss Ivanochko was profiled in the Bravo Channel Documentary Freedom Series. Her MFA research was awarded the Joseph Armand Bombardier Canada Graduate-Masters Award.